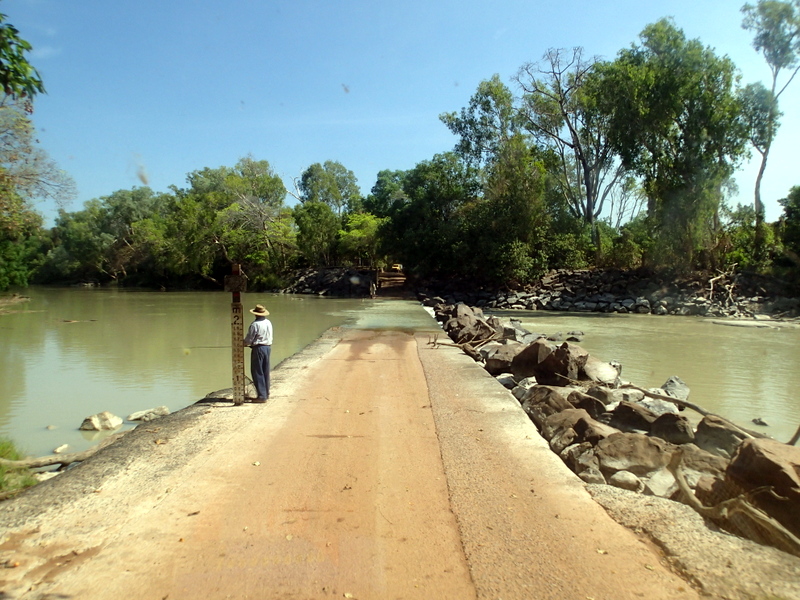 Thursday we got off to a bad start. We had booked the Arnhem Land tour at Cooinda, but we were not too convinced that the booking office had done it right. We paid the money but the registration never went through to the tour office. Fortunately we had our receipts and tickets.

After waiting around for a while and a couple of chats with the park manager the tour company finally got the message that they had forgotten 5 people. The tour owners drove up and collected us and took us to the Ubirr Boarder Store. We caught the tour here and had not really missed anything. Infact chatting with the driver who was taking us to the start of the tour told us about the Stone People, the fire sticking of the country, the management of the land, mega fauna and many other very interesting topics. He said that when Kakadu park management was taken over by the government they disregarded the advise from the Aboriginals about fire sticking the country. This attitude was changed when a large bushfire devastated the country destroying habitats that have never recovered. Parks Management then sought the advise from the Aboriginal communities on how to manage the country and thus re-introduced "fire sticking". He also told us about the fire birds that grab embers in the air and drop them ahead of the fire front to start new fires so that their prey will be flushed out, or the crows that have figured if you flip a cane toad on its back and peck out its stomach you don't die. Some other bird species have learnt from the crow. I find this all very very amazing - how animals adapt to and leverage environmental changes. We arrived at Cahill's Crossing which is a road that crosses the East Alligator River and into Arnhem Land.

Crossing the East Alligator River into Arnhem land on the large 4WD bus that we were on was pretty easy affair. Our first stop was Injalak artist community. The purpose of this community and presumably other like this are to provide a self sufficient source of income for the local people. Some of the people were not comfortable with a bunch or tourists that I'm sure happens every day just dropping in and watching them at work so they took themselves off. I must admit that I felt somewhat uncomfortable with the whole process as it seem to me like we were visiting a sort of zoo to watch people work and as such I really did not take very many photos. It was interesting listening to one of the elders talk about the rock art and how they do not do rock art anymore in a bid to preserve what is there as well as the changing styles of art, lines, vs dots for instance. Also to try to get a glimpse of the stories behind the art.

After Injalak we went off to a rocky outcrop where in earlier days the young men would throw their spears up into a crack within the rock. This outcrop would have been a good 40 to 60 meters high. So the test showed a couple of things. Firstly you could throw a spear that distance and secondly you could hit a target - all very important when your lifestyle is hunter gather. Also very important for a young woman when she is choosing a potential husband as you need to know that your husband can effectively hunt for food.

Near by this site was a burial cave - we could see bones from long departed people scattered in some instances by the animals that roamed this part of the country. We were also asked not to photograph these remains so as to respect the dead. Recently a village elder had passed away - a very well respected village elder. All the trees that we could see had red ocher painted around their trunks as a mark of respect and passing. We saw many other rock art sites - all different. We visited a stunningly beautiful lagoon and watch as a croc tried to catch a pelican, but the pelican was too clever and just kept on moving out of reach as each time the croc got too close. What was disappointing about this beautiful spot was the litter, rubbish, dirty nappies etc and what I could not reconcile in my head was the statement that the Aboriginals looked after the land but this litter was from them. We had lunch at this spot - litter aside is was a really beautiful spot.

Heading back now to Ubirr and back to Jabiru for a swim in the pool, a couple of beers, another BBQ dinner and a lecture about the area slide show and all by the pool by about the area.