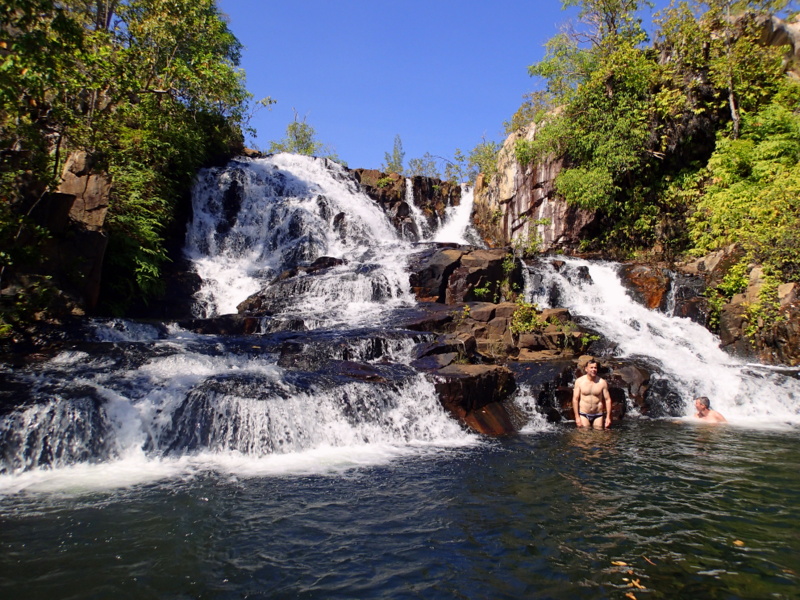 We were up at 6.30am on Saturday. One of the earliest starts for a Dodgey day. A quick breakfast and off on our way by 8am. We were the last to leave camp and this also became a bit of a feature of our walking. Over the course of the day and the days that preceded us we would catch up with most a far few of the walkers who had left ahead of us. The walking was pretty easy and the terrain easy to navigate and easy to walk. We were like a little procession of ants walking at an easy 5 to 6 km per hour.

We stopped frequently to look at interesting feature, termite mounds, rock art etc. Saturday was a 10km day so once again not too long and would have us in camp around midday. We made sure that we were well hydrated - dehydration is a real risk in this environment.

We found some rock art along the way and it made you wonder what it was the early people of Australia were trying to communicate, what stories or what instructions were being communicated. People with sun rays coming from their heads. We mused that maybe some young indigenous people took to rock art as we today take to graffiti and that one day some new civilisation would find a Banksy Parachuting Rat and would theorise that the people back tens of thousands of years ago worshiped some strange four legged creature that descended from the skies. Clearly the rock art has more meaning as the rock art was added to and changed from one generation to the next.

We made it to camp around midday. Went for our swim. In the water we spotted a Mertons Water monitor with his head just poking up amongst the water lillies. This was a small guy and we were luck enough to see it get onto a log to sun itself - its beautiful colours, skin spotted with yellow and its stream lined body clearly adapted for life in and near the water. We saw a large specimen later on that day a good meter long.

After lunch we went exploring and followed the river downstream. We arrived at Crystal Falls - a massive plunging waterfall cascading down 50 meters of more off the escarpment. We had a good look around the falls but we could not find a way down. Once again I was amazed by the volume of water that was flowing over these falls and once again amazed that this was the dry season.

That night we decided to have our red with with our dinner - a fine dinner with Chinese sausages, peas, corn and rice. We saw some really large fresh water crays and some small native fish. We did discuss catching a couple of these crays but thought why, why eat something when we are not hungry and when we have our own food. Live and let live.