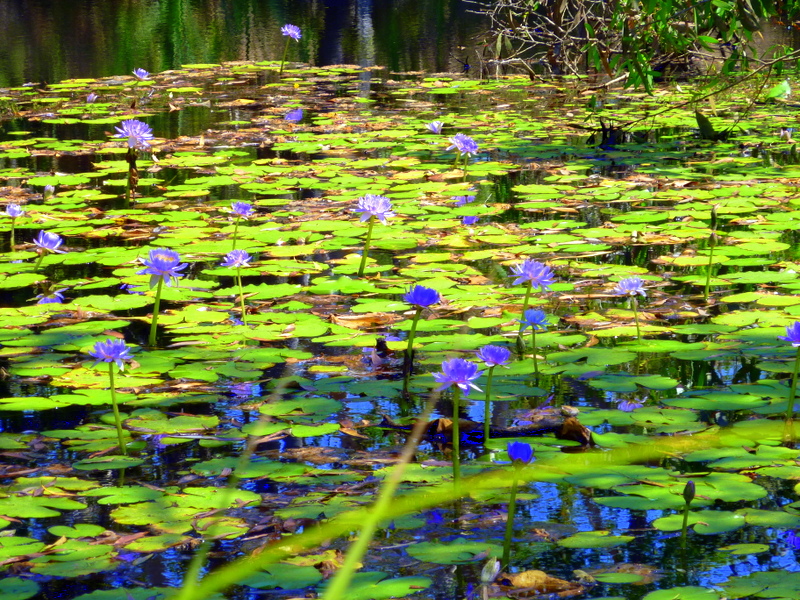 Our next destination was to be either Edith River Crossing or Sandy Camp. We were not sure so we had not commitment to either. Leaving the water again we made our way through a variety of landscapes - some swampy, some rocky and some grassed. The grassed ones spooked me the most due to the height of the grass and when you are leading the walk you were not sure if there would be snakes, pigs or buffalo about to cross your path - none of which you would want to unexpectedly meet.

We made pretty good time to Edith River Crossing but the camp site was pretty uninviting so after lunch and a quick swim we pushed onto Sandy Camp. The worst part of this day was when we were walking through some very rocky landscape that just radiated the heat back at you - there was no respite from the heat until we got back into the grassed and treed areas.

As we approached Sandy Camp we encountered the most spectacular water hole filled with a mass of purple water lilies all in various states of flowering. It reminded me of Monet's famous Water Lilies. We spent some time photographing this spot as it was truly beautiful. The light was hitting the water hole at just the right angle that accentuated all of the colours, greens, purples and blues.

Our next camp site was situated on the banks of a large water hole which was deep and clear. We setup camp under a couple of trees, the ground was sandy and soft. The water hole would have been an easy 100 meters across and 200 long. After swimming around for awhile we decided we had better eat lunch. That night we had some fruit bats in the camp and some creatures scampering around the camp site.

We tried some green ants, instead of biting off their bums, all you had to do was lick them to get the same strong citrusy taste.