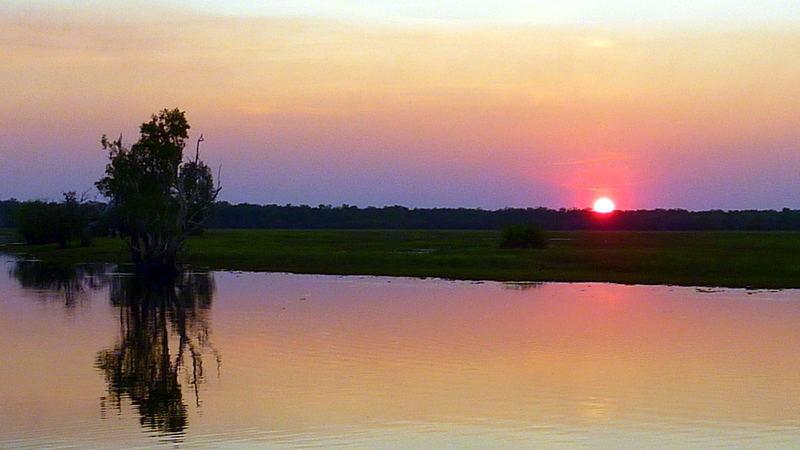 Wednesday morning we had a relaxed start and did a bit of planning around the next few days. We decided not to visit Cutta Cutta Caves South of Katherine as it would cost us too much time, so instead we decided to head straight up to Kakadu and stay at Jabiru.

We headed back up North along the Stuart Hwy to turn off at the Kakadu Hwy and head East. On the way up we spotted a water buffalo grazing by the side of the road so we stopped and got out. Now these things are not tame beasts and if in the mood can move quickly towards you and they are big. This was a little fella, but non the less we kept a respectable distance. We did get some photos of it. Our next stop was the entry point into Kakadu where you had to pay some entry fee to the park, we also got some icecreams - as you do. stop over.

We drove through to Cooinda which was a large tourist stopover. From there we planned our next couple of days. We booked a sunset cruise on Yellow Water for that evening as well as a trip into Arnhem land the following day. We liked the notion of this trip because it provided something back to the local Aboriginal communities. Also to trip into Arnhem Land required a permit so would be something that couple only be done with a tour company. We had lunch at Cooinda before leaving for our sunset cruise of Yellow Water.

One thing that struck me about this part of the country was the lushness of it all and how the "wet" must transform the landscape. Fleeting visits to this part of the country only makes you want to come back for more, the other thing that we noticed was that the people were a bit harder, tougher. It's true that a hard place makes a hard person. When its wet its really wet and we saw photos of Katherine back in the 80's when flood waters were lapping at the balcony in the main drag. When you look at Katherine you think that the area is as flat as a tack, but still the volume of water is such that it floods to major levels.

We spent a few hours in the Warradjan Aboriginal Cultural Center. It was really interesting to understand the notion of "skin" and how that idea ensured genetic diversity amoungst the people. Also the early settler photos taken of some of the buffalo hunt. Some of the stories such as the Yam and how the people know when it is OK to eat. Some of the stories are telling of when things happen, such as hearing the grasshoppers is a sign that the yams are ready to be dug up. But don't eat one yet because they are toxic. You need to soak them in water for a couple of days and then cook them over a fire so that the toxins are removed. How on earth do you figure that sort of stuff out? The different spears, traps and boomerangs and their purposes - all really really interesting. For whites to have claimed and persisted in the claim of "terra nullis" beggers belief when the evidence is so contrary to that idea.

We boarded the boat for the cruise at about 4pm. Yellow Water is national park land not a croc farm or anything else like that. The amount of wildlife that Yellow Water supported was truly amazing. From crocs - of course, to Jabiru's, Buffalo, pig faced turtles, Azure Kingfishers, Sea Eagles and a myriad of other creatures. One thing was for sure, if you fell out of the boat you would not make it to shore, there were so many crocs that we could see I'm sure you would have been eaten by something in that water. Yellow water is extensive and I'm sure we only traveled a little way along the waterways.  We had an Aboriginal guide on the boat who told us the stories about the Sea Eagle and the Brown Eagle and how they had decided which part of the land they would occupy. He also pulled up some Lotus Lily and extracted the seeds for us to try. They were really its tasty. He also told us that a croc cannot take you unless it can get tail on the ground, I was non too convinced of this story nor the one about slapping your hands on the water to scare them away.

We got a spectacular sunset and I've got to same the cruise was well worth the cost.

We drove to Jabiru for the night were we had booked some accommodation at Cooinda. We had a nice cabin that slept all of us. JayBee was determined to try his Aldi tent and proceeded to do so. That night we BBQ'ed some meat that we had bought in Katherine as cooked up some veggies as well. Cheese and crackers before hand - all very civilized.